Other Languages / 其他语言 / 其他語言
简体中文繁體中文
To answer the requests of the fans, here are five new stories of what happens After.

Kokoro's Story
[Yume Utsutsu Re: Unification]
A year and a half after Eureka Software...safely...released Nie, Majo and the End of the World, its steady sales led management to decide to release a fan disc.
With Marie returning home due to pressing factors, Ai finds herself in charge of the art. Saki saddles Kokoro with the job of writing the fan disc's plot, giving the sisters a heavy mission: Creating this project themselves.
The two are crushed by the pressure of the very game they had always dreamed of making, one where Ai drew the pictures and Kokoro made the story.

In a world with no magic, will the two be able to make a world(game) of their own?


Saki's Story
[Deadline rather than paradise]
Months after the brutal scramble to finish the NieMajo project, Saki Mugendo had finally gained respite.
With that painful fight lost deep within her memories, she was giving her body and mind time to recover before planning a trip with her beloved Ai Otori.
There is, however, no rest for a game developer.
"Our scenario writer ran away!"
The PZ team next door sends up an SOS.
The flames engulfing Eureka Software bring Saki to yet another battlefield.
The schedule crumbles and new deadlines form, presenting the question: Saki, will you go forth, or will you cower?

And will Saki make it to the trip she promised with Ai?!


Nana's Story
[Ghosts of the Past]
After facing her past, Nana Tachibana found a happy ending with Otori Ai.
A year after the release of NieMajo, her situation has radically changed. Her performance as Majo giving her a spark, Nana is now known as a promising rookie.
One day, a reporter from a voice acting magazine visits Eureka Software to interview her. However...
"I was asked to give you this." The reporter hands her three letters, senders unknown.
She accepts, but notices that one is from her long-deceased mother-in-law...

What will become of the pair as they face the ghosts of the past?


Marie's Story
[Married Life]
Leaving her past as Marie behind, Maria took on the Otori name after marrying Ai.
Now out of the company dorm and in a new home, the two have been given a new task: Creating the key designs for a new project.
A new job, a new married life -- everything is unfamiliar, but everything will be all right. As long as they have their deep love for each other, there is nothing they cannot overcome.As strongly as they believed that, however, their married life had only just begun.

Maria finds herself differing with Ai over something tiny...


Honoka's Episode
[She, Her Dog, and Ai]
That summer, Ai was captivated by her in her swimsuit.
She was so mature, so urban, so competent, and just a little bit off: Honoka, president of Eureka Software.
She was far off. Farther than anyone, perhaps even farther than her closed off sister.
..The unmoving distance between the two closes up in winter.
This is where it all began, the same season that the doujin version of NieMajo was created.

In the season where one's breath turns white, the two and her dog find themselves living together... 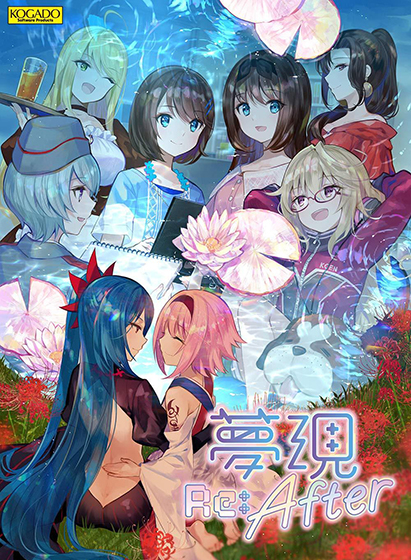